Steampunk Hands around the World - Interview with Jennie Gyllblad

These days, coincidence and serendipity seem to be often nudging me onto a new and exciting course, crossing paths with some very interesting individuals...

When a Live Roleplay friend introduced me to her friend, with a view to maybe guiding and larping alongside her in a large fest event, I hadn't quite realised what sort of creative adventure would begin.

The lovely lady in question turned out to be none other than Jennie Gyllblad, artist and designer. 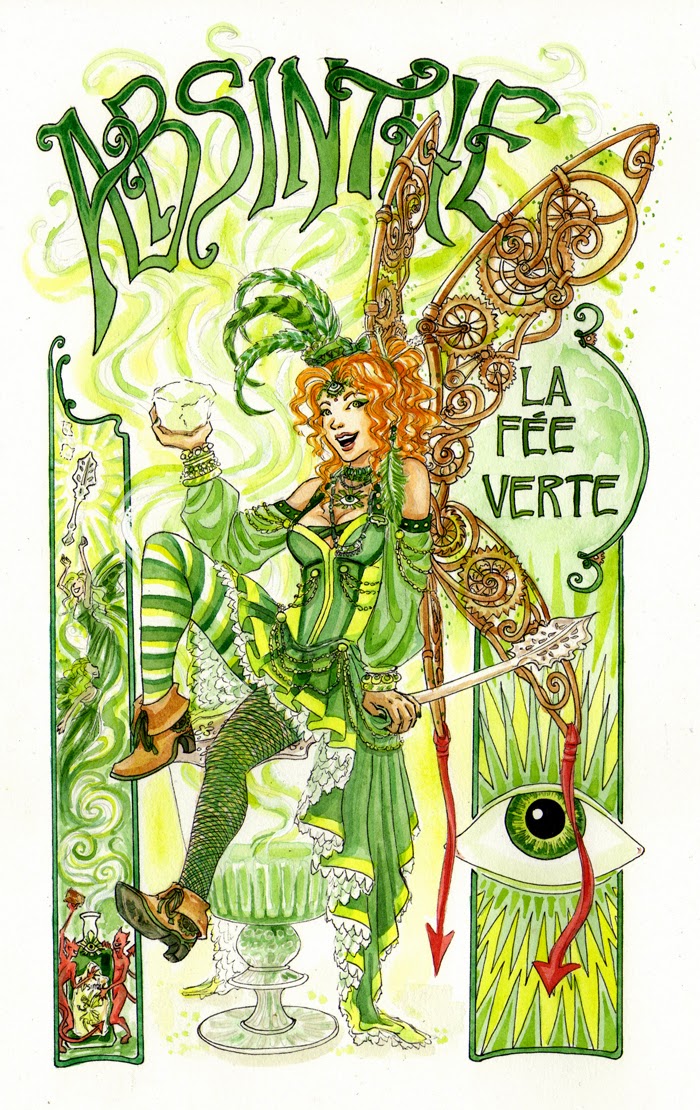 1.    What was the main inspiration behind starting your business?

"I’ve always wanted to do something that involved me drawing and painting, but it wasn’t until I went to university and did a degree in Illustration that I properly realised that I quite possibly COULD do it for a living. It would be hard (our tutors drilled that into us), but if you were willing to lose sleep, lose your weekends and generally lose your social life, you could maybe scrape by. Spending 3 years alongside likeminded people on an illustration course was crazily inspiring.

As someone who’s been drawing and writing stories ever since she was a kid, it just felt natural to keep on doing it, and if I could actually earn a living from it, then bonus points to Jen!"

2.    What projects are you currently working on?

"Many many at the same time! I am the great project juggler! Right now I am doing a few stories alongside many painting and design commissions.

I am the illustrator and designer for Clockwork Watch, a steampunk transmedia project which has 3 graphic novels and a few short stories attached to it. So far ‘The Arrival’, ‘Breakaway’ and ‘Tick Tock IPA 1’ have been completed! More to come! In short, Clockwork Watch is a more multicultural Steampunk world where the main focus is on a Sikh family that is called over from India to London, due to the father Chan Ranbir’s exceptional skills as a scientist.

I have just begun a book project with Jared Shurin where I will do both the cover and the interior illustrations of the story ‘The Problems Of Violet Strange’ set in 1915. It follows Violet, a rich debutante who doubles up as a secret detective! Almost a bit like a female Sherlock Holmes.

Then there’s obviously my poor neglected personal project ‘Skal’, which I only pick up when there’s spare time. It is an online graphic novel set in an Arabian-inspired desert world. The story centres around a woman on the run after having been broken out of a Monastery jail. Won’t say much more for now, but it isn’t an all-ages story, that’s for sure."

3.    Where do you find your inspiration and what makes you different from the other people that make what you make?

"I follow many people who inspire me, mainly on twitter and facebook, where I am supplied with daily inspiration pictures! Twitter is really the one thing that keeps me sane and functioning. I work in my own studio, so I don’t see people all day unless I go out. Twitter is like my virtual studio where I can talk to other artists from all over the world!

As for what makes me different… I don’t like to view things that way. I think everyone’s craft is slightly different. We’re all essentially borrowing and stealing from everything around us, and then twisting it into what we find pleasing. But I guess the fact that I work traditionally with watercolour and gouache in an industry (comics) where you’d either be doing things digitally or separating the jobs (penciller, inker, colourist), could be considered slightly different? However, if you look at European comics, especially French graphic novels, you’ll notice that I’m positively mainstream and bland in comparison ;)"

"The Zone. The Flow. You know when you enter it and when you become wrapped up in it. It’s better than sex. … Okay it’s as good as sex."
5.What is your best advice to newbie artists just beginning their businesses?

"Keep in mind that this is coming from first hand experiences of me freelancing as an illustrator and comic book artist, so my advice may not carry over well to other industries! I am also really wary of giving general advice without knowing the personal circumstances of other artists. But with that said, here we go!

Set yourself an hourly rate, or a day rate (Do a few pieces while timing yourself so that you get a rough idea how long it takes you to work). It’s so easy to sell yourself short when you really need the commission! But keep in mind that you are doing a skilled job, so you should be paid accordingly. Please don’t work for free (unless it’s for charity or something). If someone says it’ll give you ‘great exposure’, alarm-bells should start ringing.

Be nice to others as well as yourself. This is my main advice, for many reasons. First up, as a freelancer, you are on your own, and your reputation is key. If you treat others badly it won’t do you any favours when finding work. On the flipside, if you get the reputation of actually being quite pleasant to work with, you’ll soon have more clients come knocking. Second: Going at it alone can be rough. We work very hard for sometimes very little, so never forget to be kind to yourself and to keep enjoying what you do. Treat yourself! Because you are awesome. And if you need a chat, hop onto twitter. There are loads of us out there, trying out this own business thing."
6.    What are your top 3 favorite shops on Etsy and what do you like about them?

"So hard to just pick one! But here goes. Also, keep in mind that my choices are very centred around my love for costume designing and general dressing up!

Sanskrit Dream : I’ve already bought earrings from here they quickly became my favourite pair. I have about 10(!) other earrings that I am planning to purchase in the near future. It’s perfect if you want to achieve that chunky I’ve-had-my-earlobe-widened-because-I’m-hardcore look, while not being quite so dedicated.

Lydia Wall Millinery : Now this is the shop that, if I had the money, I would be buying LOTS from. I even have some custom order ideas for my future viking inspired costume that I want to put through to the lady. Lasercut leather both looks and feels fantastic. It makes the accessories look strong AND feminine at the same time. The perfect combo!

Magic Tribal Hair : Fantastic hair accessories can be bought from here! The shop owner both focuses on the tribal belly dance look and the steampunk aesthetic. If you want to combine the two, this is a very nice place to get some accessories." 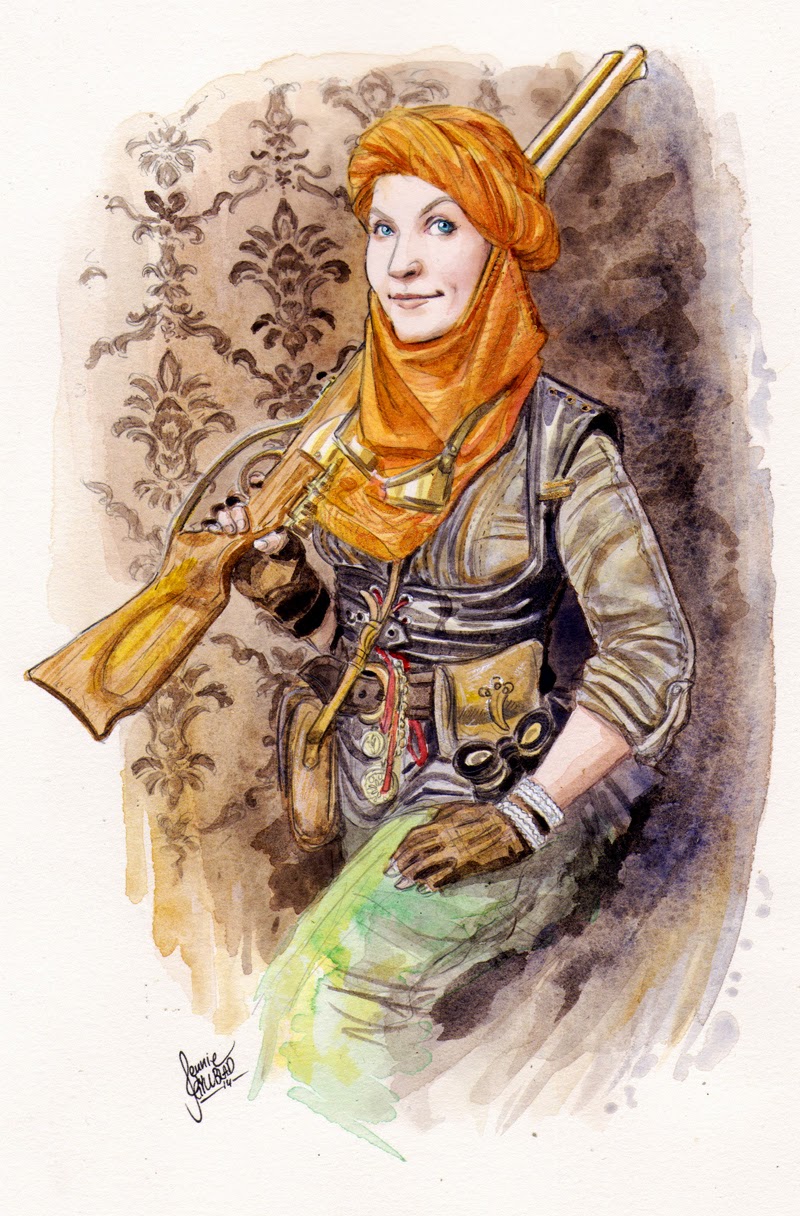 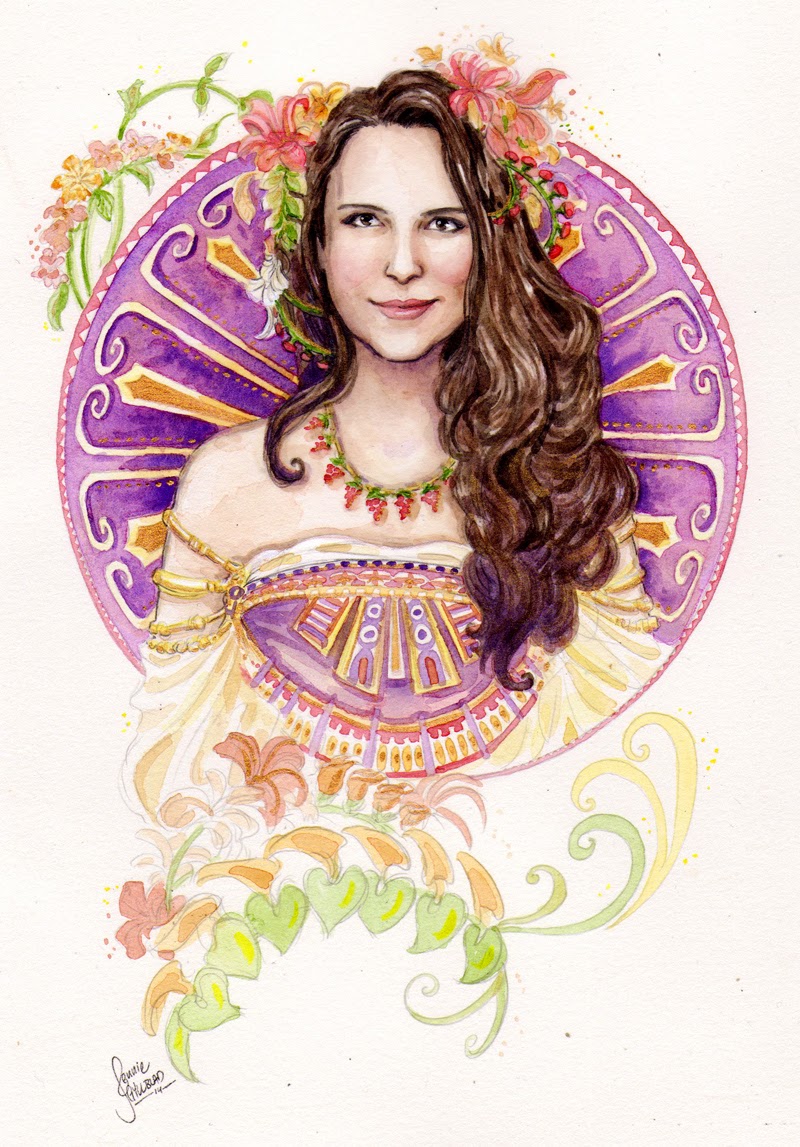 7. Where can you be found online?
"My site: http://www.jenniegyllblad.com/

My twitter (this is where I pretty much live on a day-to-day basis): @JennieGyllblad


7.    What do you love about the Steampunk Genre and how did you become involved in it?
"I’ve been asked how it all started before, and… I honestly can’t remember when I first encountered Steampunk! I know I was doing basic costumes and characters of that style for a few years (simply out of love for the aesthetic), but never as a job. It was only when I was approached by Yomi Ayeni (the creator of Clockwork Watch), that I properly dived into the genre head first! But dare I say that I also entered the genre from a slightly different angle? The first story I did was a more multicultural one, and Yomi has been actively trying to promote a more open look for Steampunk, which looks outside of the colonial time and more into other cultures.

This brings me to what I love about the genre. It borrows positive things from the Victorian era, like dressing up and being a gentleman/lady, while also adding a large dollop of female empowerment (something which of course was not very prevalent in the Victorian era).

Dare I say that Steampunk actually makes it ‘cool’ to be polite and drink tea! The genre is about experimentation, about creativity and about adventure. Steampunk is such an open genre, that there are several sub-genres residing within it. Can you have magic in a steampunk world? What types of technology are plausible? What about the look and cultures of other countries during the Victorian era? Asian Steampunk? African Steampunk? Scandinavian Steampunk! What craziness were they up to? Mix and match like crazy, it’s allowed, heck, it’s encouraged. This genre is ever evolving and ever-changing. Mainstream media are just beginning to wake up to it in the UK."

Thankyou so much for that illustrative and very entertaining interview, Jennie! I'm sure that there are many artists out there who can relate to the creative experiences that you so pictorially- eloquently describe.

To see Jennie's Work In Progress snaps (#WIP) hop onto Twitter. It was so much fun watching my Navigatrix portrait develop - thanks again! (P.S. Hopefully, one day,we'll get to that LRP...)

This blog has now been archived. Comments may not receive replies.